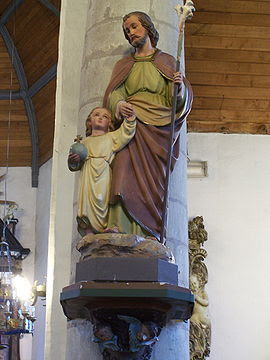 Although always regarded as a father, Joseph was little known on his own account until the later Middle Ages, following the adoption of his feast by the Franciscans in 1399, and later by the Dominicans. Due in part to the “goddess like granduer” accorded to his wife, Mary, Joseph was reduced to “an abject, even ludicrous old man who figured as “God’s cuckold” in [medieval] legends and plays.”[35] The feast was only added to the Roman Breviary in 1479, and was not compulsory for the whole Catholic church until 1621. An effort by some church leaders, including Jean Gerson, at the Council of Constance in 1416 to have Joseph elevated to a rank next to Mary and above the Apostles, with a universal feast of The Marriage of Mary and Joseph, was a step too far, and not successful. The promotion of the cult of Joseph was connected with the reaction against an over-courtly emphasis on the Holy Family in the preceding centuries, and reflected a wish to think of them again as a down to earth human family, encountering many difficulties in ordinary life.[36] Gerson had hoped to popularize the image of a young, virile, manly Joseph who safeguarded his wife’s perpetual virginity by his own virtue and not by impotence. He also hoped that a strong patricarchal image could aid in dealing with the Great Schism.[37] In any case, with the de-emphasis of Mary’s role from what it previously had been in the wake of Catholic Reformation, Joseph was able to step out of wife’s shadow and be a person in his own right.

Within the Roman Catholic tradition, Joseph is the patron saint of various things and places. Pope Pius IX proclaimed him the patron of the Universal Church on December 8, 1870. Joseph is the unofficial patron against doubt and hesitation, as well as the patron saint of fighting communism, and of a happy death. Joseph having died in the “arms of Jesus and Mary” according to Catholic tradition, he is considered the model of a pious believer who receives grace at the moment of death.

In addition to his primary feast day in the Catholic and other traditions, St. Joseph is honored by the Feast of St. Joseph the Worker (May 1), introduced by Pope Pius XII in 1955 to counteract May Day, a union, workers and socialists holiday. This reflects St. Joseph’s status as what many Catholics and other Christians consider the “patron of workers” and “model of workers.” Catholic and other Christians teachings and stories about or relating to Joseph and the Holy Family frequently stress his patience, persistence, and hard work as admirable qualities which believers should adopt.

Veneration of Saint Joseph, when compared with that of other biblical saints, was introduced rather late in the Catholic Church. It was in the tenth century that he began to be celebrated in some parts of the West with a feast on 19 March. This feast was accepted in Rome only in 1479,[38] less than a century before the 1570 Tridentine Calendar, in which it was included. This is Saint Joseph’s Day in the Roman Catholic and Anglican traditions. In 1847 Pope Pius IX declared Saint Joseph patron of the universal Church and instituted another feast, with an octave, to be held in his honour on Wednesday in the second week after Easter. This was abolished by Pope Pius XII, when in 1955 he established the Feast of St. Joseph the Worker, to be celebrated on 1 May (see General Roman Calendar of Pope Pius XII). Pope John XXIII added the name of Saint Joseph to the Canon of the Mass. The 19 March feast is a Solemnity and so is transferred to another date if impeded (for instance, if it falls on a Sunday within Lent. The 1 May celebration is an optional Memorial, and so is omitted if impeded.

In the Eastern Orthodox Church, the feast day of Saint Joseph is celebrated on the First Sundayafter the Nativity of Christ. The following hymn is chanted:

Verily, Joseph the betrothed, saw clearly in his old age that the foresayings of the Prophets had

been fulfilled openly; for he was given an odd earnest,

receiving inspiration from the angels,

who cried, Glory to God; for he hath bestowed peace on earth..